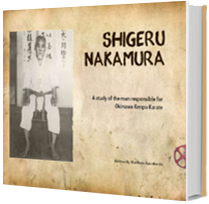 I’m very pleased to announce the release of this new ebook entitled “Shigeru Nakamura: A Study of the Man Responsible for Okinawa Kenpo”. This work is a culmination of research and exploration into the roots of both modern karatedo and the life of one of its great progenitors.

Although the terms “Okinawa” and”Kenpo” are both sprinkled throughout many styles, the term “Okinawa Kenpo Karate” is specific to the efforts of one individual – Shigeru Nakamura. Interestingly, Nakamura never chose to name his martial art anything specific like Goju Ryu or Shotokan. Instead, he intentionally left it very broad in the hopes of gathering all the styles of karate together under one banner.

This ebook explores the climate of changed that engulfed Okinawa during the early-mid 1900s and how World War II Japan effected the develop of the Ryukyus in significant ways. It also discusses Nakamura’s life and how he found himself simultaneously entwined with Japan’s assimilation projects and some of the most stalwart protectors of Okinawa’s unique culture.

Even if you aren’t an Okinawa Kenpo practitioner, I believe you’ll find the environment in which Nakamura grew up to be very interesting and telling of how karate has developed into what it is today. 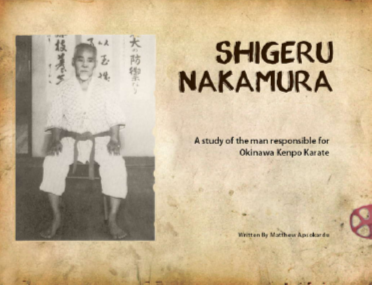 Finding history for this kind of project was a difficult task. Okinawa is renowned for its penchant toward word-of-mouth transmission, so very few significant resources were available for Nakamura Sensei.

In order to create a streamlined story, I tapped Heilman Hanshi (Student of Seikichi Odo) heavily and took the cues he gave more to pursue other avenues more deeply.

The result (hopefully) is a story that has both personal aspects and elements of context.

If you have any information or pictures that you think might enhance this ebook and shed even more light on Nakamura Sensei, contact me at ikigai108@gmail.com. I am perpetually open to improving this work.