Even Funakoshi Got Caught Off Guard

Gichin Funakoshi, the famous karateka who inspired the development of Shotokan and the dissemination of karate throughout Japan, wrote a pivotally important biography known as “Karate-do: My Way of Life“. In this all-too-brief book Funakoshi describes his martial arts training and experiences throughout his long life (he lived to be 88). 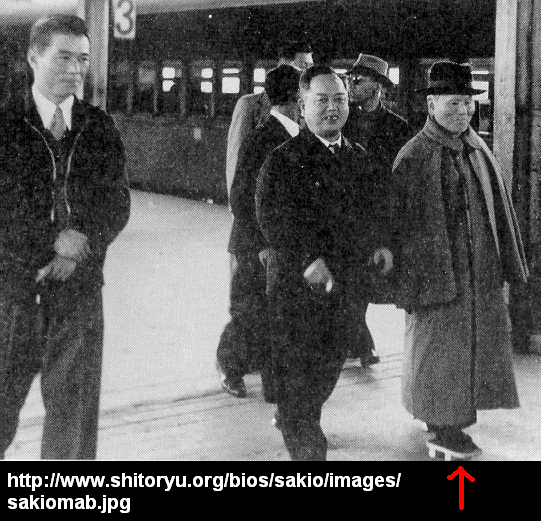 One of the stories he tells involves a poetry reading party in the city of Tamagawa. After enjoying a night of festivities, the 80-year-old Funakoshi rode the train back to Otsuka station, where he set off to walk the rest of the way home.

Carrying only his umbrella and furoshiki (essentially a cloth sack), Funakoshi traveled along the night street when suddenly a figure popped out from behind a lamp post. The young tough confronted Funakoshi, first reaching toward his umbrella, then engaging him in nervous small-talk. He asked Funakoshi for a cigarette, and when Funakoshi claimed he had none, the tough demanded to see the inside of the furoshiki.

When Funakoshi refused, the tough grabbed the umbrella and swung it at Funakoshi’s head. Funakoshi ducked and grabbed the thief by his testicles. The pain froze the young man, and as a street constable came by, Funakoshi was able to release the man into the officer’s custody. 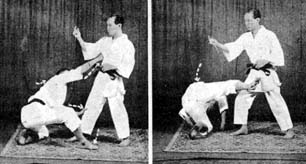 On a separate occasion Funakoshi was attempting to board a ferry that was connected to a dock by a single wood plank. Unfortunately, at that time, a storm was brewing and caused the sea to become quite uneven.

As Funakoshi stepped onto the board, the sea swelled and a high wave began to form. Relying on instinct and quick reactions, Funakoshi balanced himself and then swung his luggage forward, using that momentum to carry his body on board the ferry, barely avoiding a dangerous spill into the ocean.

There are a couple of valuable takeaways that we can extract from these small tales. The first is that nobody gets a free ride when it comes to personal safety. No matter what part of town you’re in, or who you are, your personal safety is something for you to consider seriously. Men, as well as children, women, and the elderly should understand that violence can occur in a moment’s notice for a wide variety of reasons. The attacker could be desperate, bored, mentally unstable, sexually deviant, and so on.

In modern times there has been a stronger push for equality in the arts, where as short as a generation ago it was largely considered man’s domain. This movement toward the equal inclusion of women and children should be continued, and we as martial artists should do our best to spread the core concepts of our arts. We also need to be certain to spread the proper mind and heart that goes along with this kind of dangerous training, otherwise we are merely flooding the streets with more effective thieves, stalkers, etc etc.

Secondly, it is critical that we do not overestimate our own prowess. Through years of hard training we become confident in our abilities to defend ourselves and others, maybe even using that skill in live scenarios. Nevertheless, confidence can easily lead to overconfidence, which can re-introduce many of the pitfalls that haunt people completely unskilled in the art of self defense.

Someone like Funakoshi spent a lifetime training in the arts and honing his abilities, and even he was caught unawares from time to time. No matter how well tuned your radar, and how street-wise you are, it’s important to remember your own human limitations. By doing that you can stay sharp, continue to make good decisions, and try your best to integrate your art in such a way that it expresses itself naturally without highly structured decision making.

This natural integration can manifest itself in unexpected ways, like it did with Funakoshi when he saved himself on the dock. Even his instructor Yasutsune Azato expressed marvel at Funakoshi’s enhanced abilities to react to the unpredictable dangers of the ocean that day.

Finally, if you wish to pursue karate in the same fashion as the old masters, you need to take these stories into even deeper consideration. In Funakoshi’s encounter with the street mugger, he attempts to hold off from violent behavior as best as possible (some might say he waited far too long to act). Yet, at the end of telling that story, Funakoshi expresses regret at having ‘taken the offensive’ against his attacker. He sympathizes with the man whom he surmises was likely a vet coming home to nothing, and living in a state of desperation.

To live the way Funakoshi lived requires an unwavering mind which some people may find too unrealistic to implement in their day-to-day lives. Until you have come to a conclusion about your own willingness to conduct violence, and when you might deem it appropriate, you’ll have a gap in your defenses.

Although martial arts training can (and should) help people overcome fear and uncertainty, it is critical to never lose that tactile realization that even you could be cut, hit, and taken advantage of.