I recently learned that mixed martial arts federation Elite XC filed for bankruptcy.  It’s one of those occasions that makes you scratch your chin because it is both surprising and expected.

If you’ve heard of Elite XC, it’s probably due to their two main stars: Gina Carano and Kimbo Slice.  These headliners drew a lot of attention – some good, some not so good. 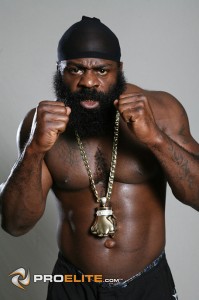 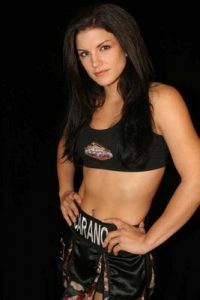 Guess which one is Gina!!

Elite XC was a relative newcomer in the world of MMA, and was not at the same level as UFC by any means.  Despite that, they made a pretty big splash through a combination of hype and antics.

Gina Carano, who came from a Muay Thai background, became a quick fan favorite as she racked up wins.  Showing poise and skill inside the ring, Gina made her way up to the top of Elite XC and currently has the MTIA championship belt.  Another reason she became a fan favorite – see picture above.

Kimbo Slice is perhaps one of the most controversial MMA fighters…ever?  I don’t know, that might be a bit strong.  But he really does have an interesting story.  Getting his start in backyard brawls, Kimbo quickly made a name for himself by taking the beat-knuckle to all comers.  For example:

This video is actually one of the tamer ones of Kimbo on Youtube.  Unfortunately, this brawling success didn’t transfer as smoothly as everyone thought it might into MMA.

In his last match, Kimbo got knocked out in 14 seconds by Seth Petruzelli, a good fighter but not a superstar by any stretch of the imagination.  Kimbo’s previous fight had been won on a controversial decision.  Despite his grooming for success, things just weren’t panning out.

Ultimately, losses, legal mishaps, and mismanagement all built up into one final collapse.  I found it surprising at first to hear about the shut down due to the high profile nature of Elite XC events.  They were on national networks and had all the trappings of a big time scene.

But, behind that was a general sense of sleaze.  The members of the Convocation of Combat Arts discussed this a little while ago, and we all generally agreed that the fireworks, dancers, and hooplah smacked of cheesy “pro wrestling” style affair.

Steve of BJJ Log stated: ” if they had put together a decent card I might forgive some of the spectacle, but the spectacle only served to perfectly frame the lack of substance in the rest of the broadcast.”  I think he’s right. 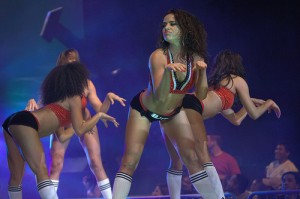 You’d think I’d be sad to see Elite XC go (what with the above dancers and all), but I’m not.  MMA is walking a fine line these days between where it was and where it is going.  MMA used to be a testament to no-holds-barred combat between two people of any style and any weight.  The goal was to have the better man win, no excuses.  These days, UFC MMA has turned into a bonafide sport with exceptionally skilled and trained athletes.

I think MMA will be a better place now, until the next profiteer rolls along and tries to do the same thing.  It’s inevitable with big business such as this.  Eventually the pomp is likely to stick, but then the next underground fad will start and the cycle will continue.

Your thoughts on the joys or laments of losing Elite XC?