The Travel Channel recently released a new show called “Dhani Tackles the Globe“. In the show, Dhani Jones (NFL Star) travels around the world and experiences exotic culture and sports.

After seeing the teaser commercials, I realized pretty quickly that some of the sports Jones was going to try were martial in nature, and the premier episode was slated to be Muay Thai Kickboxing in Thailand. I figured what the heck – let’s give it a shot.

For those readers who aren’t football fans, Dhani Jones is a well known linebacker who has played for teams like the Philadelphia Eagles and Cincinatti Bengals. Jones is known for his off-the-field personality as well, often used for football commentary. Jones is a bit of a fashion fan, sporting his trademark bowtie wherever he goes.

Dhani’s mix of physicality and personality make him an intriguing choice for host. Certainly this first episode in Thailand would test his mettle because Muay Thai kickboxing is one of the most explosive sports on the planet. At the very least, I figured, I would get a chance to see some cool Thailand scenery. Since the show was slated to film in Bangkok, it seemed like a can’t miss for wild and unusual Thai culture.

It turns out that “Dhani Tackles the Globe” is set up similarly to Human Weapon or Fight Quest. Dhani hooks up with a local guide that helps him navigate the intricacies of the city and helps him train for a week. At the end of the week, Dhani fights a local Muay Thai kickboxer.

Here is a little peek:

The training was pretty standard and kept in line with what we’ve come to expect from shows like this. Dhani worked the knees, elbows, punches, and kicks trademarked by Muay Thai fighters.

Every day after kickboxing Dhani ventured out and sampled the city. You could tell quickly that Thailand was an unusual scene for Jones, who was clearly not accustom to eating bugs and riding around on motorscooters so small that they could barely support his weight. In fact, one of the most memorable scenes of the whole show is when Jones tells a Tuk Tuk driver to take him to a ‘happening’ night spot in town. The driver proceeds to take him to a red light district. 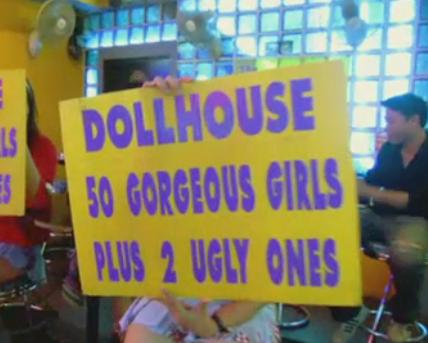 Jones is latched onto by a myriad of “escorts” trying to pull him into street-side brothels. One escort seemed suspiciously strong and bulky to be a woman…

Besides that, Jones visited the amazing Ayutthaya Kingdom in order to absorb some of the ancient culture and get his fortune read by a Thai numerologist. All in all, his crazy findings cast a pretty entertaining light on the diversity of Bangkok.

Back to the Muay Thai Fighting

In order to step into the ring, Jones had to learn the basics of Muay Thai kickboxing. In addition to traditional techniques, he also had to master the Wai Kru Dance performed at the beginning of each match and the cultural importance of the movements.

By the time his final fight roled around, Dhani was competent enough to step into the ring and make a good show.

This poor fellow didn’t know what he was in for. And I’m not referring to Jones. 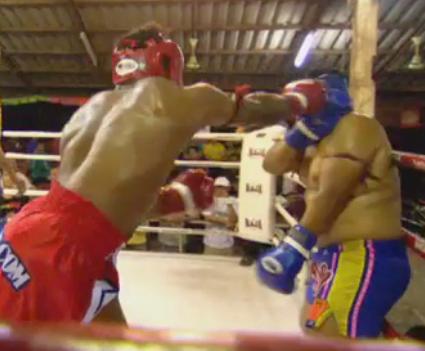 What we had with this match was a couple of bad assumptions. The Muay Thai people assumed that Dhani would need to be eased into his fight. As an unskilled foreigner, they thought that putting Jones up against a real gunner would be ‘impolite’.

On the other side of things, Jones’s handlers most likely wanted to keep Jones out of the E.R. They therefore pushed for someone who wasn’t a real gunner.

The result was this slightly pudgy, slightly afraid fighter who had to take a beating from a large and extremely powerful Dhani Jones. Ouch.

“Dhani Tackles the Globe” is an interesting show. For martial artists, it doesn’t compete with Human Weapon or Fight Quest. In those series, the hosts were put through some hellish, rigorous training experiences. Dhani doesn’t seem to be slated for that kind of punishment. However, it’s useful to see what a guy of his size, strength, and natural talent can do. Anyone with the impression that size and strength don’t matter could benefit from watching Dhani in action.

On the production side of things, Jones needs to work out the kinks in his voiceovers. It still feels a little forced. I would advise him to watch Anthony Bourdain’s No Reservations because Bourdain is a master of interesting and quick-witted commentary.

As I understand it, there will be more wrestling and combat in Dhani’s future. From what I saw of this first episode, I would probably tune back in.

Click here if you want to check out more. If you saw the show too, let me know what you thought!