Last week I covered the Samurai vs Viking matchup, with Samurai coming out on top. This week I think we have an even harder challenge to face: Spartan vs Ninja. 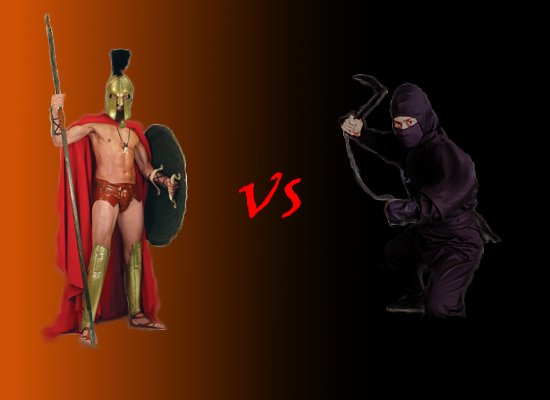 Let me tell you why I’m personally conflicted about this week’s matchup on Spike TV’s Deadliest Warrior. By heritage, I am half Greek (including my namesake). As such, I feel a natural affinity toward Sparta and the ancient Greek civilization as a whole. I find their mythology fascinating and contributions to modern day society priceless.

On the other hand, ninja are a part of Japanese culture, which I have spent a good portion of my life studying. The ninja are easily among the most mysterious, misunderstood, and just plain cool fighters of all time.

What to do?? Let’s take a look at some of the pros and cons for each, and see if we can’t draw any conclusions.

Spartan Pros: The first thing that stands out to me is the rigorous training a Spartan warrior had to go through. “Naturally Selected” from birth, only the strongest and most hardy infants would make it to childhood. Training would begin as soon as physically possible, and only got harder once the preteen and teen years hit.

Ultimately, a young Spartan lad would be sent out into the wilderness on his own. If he survived, he could come back and begin his training as a Spartan warrior. If not…well…

the entire Spartan culture was based around combat. They eliminated art, literature, and basically all kinds of non-combat pursuits in order to focus on the purity of fighting.

Spartan Cons: The Spartan arsenal was actually fairly limited. They relied heavily on the spear/shield combination, but also carried around a short sword for when their spear broke or combat became too close quartered. Rather than become proficient in other weapons, they stuck primarily to these few tools.

Ninja Pros: In stark contrast to the Spartans, the ninja had a vast array of weapons. In fact, I can’t think of any other warrior in history that utilized a more diverse and surprising array of deadly doodads.

Utilizing the element of surprise, a ninja could throw (literally) something at his enemies that they had never seen before.

The ninja also benefited from a rampant break-the-rules policy. A ninja would do whatever necessary to win a battle and had little concern for fairness.

Ninja Cons: All of the ninja’s weapons relied on speed and cunning – if a ninja were to be cornered by an overpowering weapon (such as spear and shield), he would have a difficult time navigating around it.

Furthermore, the ninja had virtually no armor to speak of. His entire body was vulnerable should he be spotted.

Some people may be surprised to learn that a 1-on-1 duel is actually a weakness for both Spartan and Ninja! Neither of these warriors wanted to fight ANYONE single handedly.

Spartans dedicated an obsessive amount of training to working as a unit. the big secret that made the Spartans so great was their ability to augment each other and create an almost impenetrable line of death and destruction. No unit throughout history was better trained to adapt yet stay together during combat situations. 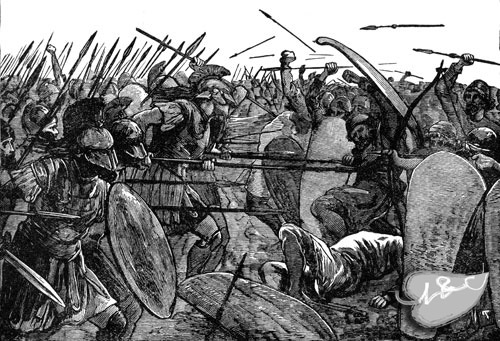 With this cohesive mindset, Spartans spent little time on their dueling abilities (although they certainly didn’t neglect it entirely).

Ninja, on the other hand, weren’t worried about the battlefield at all. In fact, face-to-face fighting usually indicated a failure on their part. A ninja’s value came in his ability to sneak around undetected and make a kill without notice.

The ninja did not want to confront Samurai or guards if he could help it. That’s why he developed his myriad of devices for infiltration and escape. As deadly as the ninja was, he certainly wasn’t a duelist.

My first prediction is that the ninja will win the specialty weapons portion. ‘Specialty Weapons’ is when the Deadliest Warrior hosts allow each  team to select an unusual weapon that might come in handy for each fighter. The ninja had such a wide variety of specialties that the odds are clearly on their side.

Whatever the Spartan spear gets paired against, the spear is likely to win. The Ninja just doesn’t have anything equivalent to it in length and power, especially if they take armor and shield into consideration.

Short range combat could be a toss up as the Spartan uses a short sword while the ninja uses a tachi.

This is an extremely tough matchup, but I believe my vote is going for the Spartan.

Now for the moment of truth, who do YOU think will win?

Want live updates for this and other posts via Facebook? Join the Ikigai Fan page!