Two things occurred to me today:

1. There are only a scant few days left before Christmas.

2. It’s been too long since I last flexed my flawless artistic talent.

Today’s post is designed to address both of these issues!

Christmas is supposed to be a joyous time of year, but sometimes  you run into people that are less than jolly. I’d like to provide a few last minute tips on how to defend yourself using the tools that Christmas provides. The following techniques were taught to me during my 3 year study at the North Pole Budokan. I obtained a seventh degree black belt and, not surprisingly, a white and red striped belt.

Of course I cannot reveal any information about my instructors, their experience, or the history of the style. But you can check out this certificate for verification: 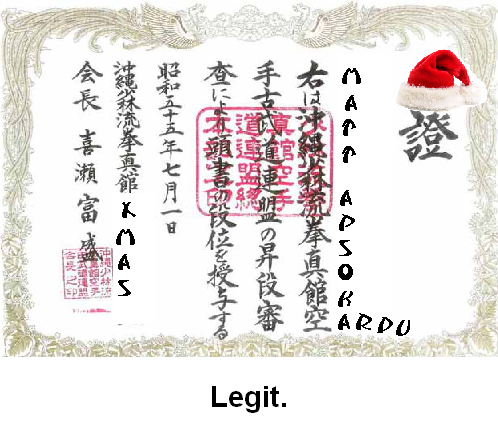 Now that any worries you had are laid to rest, here are the techniques as promised. I have compared each of them to an existing style of martial arts just so we can all follow along equally.

One of the biggest complaints about weapon arts is that “you’ll never walk around with kama or sai on the street”. Normally that’s true, but what if you had a candy equivalent?? 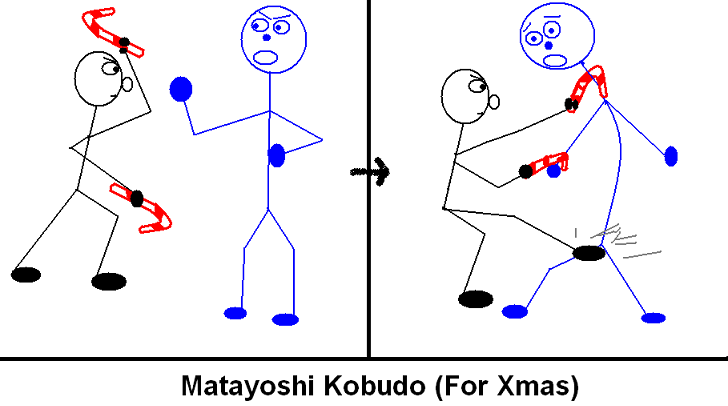 Anyone who has siblings knows what it’s like to get stabbed by the pointy end of a candy cane. A clever martial artist will be able to take that one step further and use full-on kama technique.

In this scenario, the opponent makes an aggressive hand movement inward, and you parry the attack with one cane, pull the neck down with the other (thus dropping the weight), and follow up with a significant shot to the groin region.

As this grinch-like character makes his way for your belongings, be certain to toss a few choice ornaments in his direction. If he doesn’t get the hint, you can choose more convincing locations to land your throws. The groin for example.

Don’t kid yourself – Bas Rutten’s been around for many years and he knows his things. When he gets into a tough situation, he’s going to use everything he’s got to get the job done.

So what happens when you are minding your own business, enjoying some scaldingly hot eggnog, when some tough comes up to you and starts flinging a toy train around like nunchaku?

If you’re following the Bas Rutten method, you want to start off with your hands in a good, natural on-guard position. In this case, one arm is guarding the midsection as it pretends to be a rest for the other arm, which you are using to gently sip on your fine holiday drink.

As the attacker gets ready to make his move, BANG – you toss the drink in his face. Then dangada dangada dang, kick to the biz, and your done.

We’ve been pretty aggressive and impact oriented so far. What if we took things in an aikido direction?

Let’s say you’re having a Christmas party when all of the sudden some guy thinks you looked at him wrong and starts chasing you around. The aikidoka might do something like this:

Why waste all of that energy confronting the guy when you can use his own strength and momentum against him? By cleverly slipping outside, you can have him energetically slip on the ice and have his own body weight bring him crashing to the ground. And, to keep things consistent here, we’ll toss a snowball at him where it counts.

I hope this valuable information helps keep you and your family safe this holiday season. If you have any questions regarding holiday oriented self defense, don’t hesitate to ask – that’s what I’m here for.