“Soon, Sooner, Soonest” is a concept I first heard about from Bill Hayes Sensei. I would like to elaborate upon it here, using a specific example.

In the kata Pinan Shodan, there is an opening technique wherein the practitioner does a high block and a mid-level block simultaneously. It looks like this:

I’ve included a few different styles here because, when analyzing bunkai, it’s good to get a broad spectrum of how the technique is executed. Plus, I find subtle stylistic quirks really fascinating – so indulge me ; – )

You’ll notice that there are small differences in each picture above when it comes to hand position, weight distribution, and levels of blocking. Despite that, each practitioner could go through the same mental steps to analyze their bunkai. When contemplating application for techniques in kata, one needs to consider speed, timing, and intent – in other words, how soon they want to control or damage their opponent.

Let’s start with the most basic level of interpretation:

When blocking an attack, you want to do it as soon as possible. At a base level, this means waiting until the strike has been launched, and blocking it as it comes in. Like so: 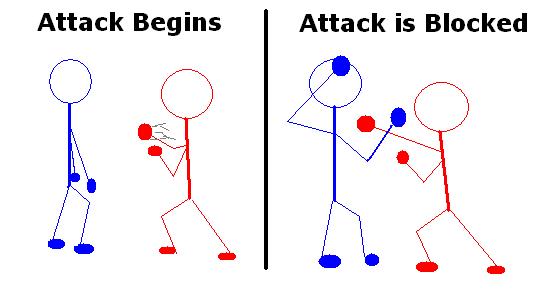 In Pinan Shodan, after the initial block (shown above), the hands generally drop down, strike the attacker’s arm, and then punch to the face. This is a very accepted bunkai for beginners as it takes the core principals of stance shifting and blocking and applies them to a live target.

Even though the blue defender successfully avoided getting hit, he did it in a relatively slow way. He waited until the attack was already at full strength and on its intended trajectory. By waiting this long, the defender ran the risk of being out done in strength, speed, and skill. Furthermore, his right hand was floating up in the air for no apparent reason. Why not put it to use?

To use this Pinan Shodan technique in a “sooner” fashion, we are going to change the kind of attack being presented. Instead of a single punch, we are now going to use a choke or push that involves both of the attacker’s hands. Furthermore, instead of waiting until the attacker has built up a head of steam, the defender is going to intercept the technique early, when it is still weak. Like so:

This is superior to the first bunkai in the sense that the timing has been improved. Rather than waiting for the attack, the defender is meeting it before it gains strength, and dissipating it as it extends.

As useful as this bunkai is, we can do even better.

One problem that the first two bunkai share is a lack of immediacy in counter-attack. In both cases, it takes 3-4 steps before a strike is actually thrown that might stop the attacker. Instead of dawdling, the “soonest” bunkai shows us how we can quickly end a combative engagement using the Pinan Shodan technique. For the sake of this demonstration, let’s revert back to the original straight punch: 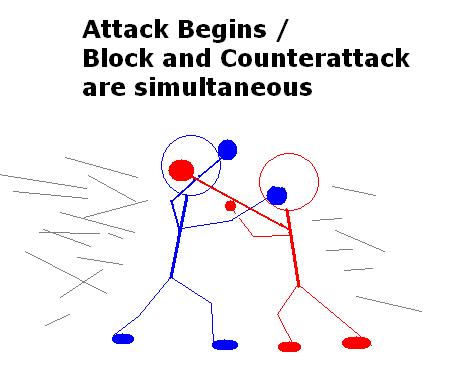 You’ll notice here that the counterattack happens immediately. In order to make this work, the block has to meet the attacking hand as it begins its trajectory and the counterattack needs to be made as the original attack nears completion. This will prevent the attacker from having a chance to formulate a second attack.

For kata purposes, after the initial counterattack shown here, the hands dropping down would be used to unbalance the opponent and the final punch would be used as a strike leading into a takedown.

I have two important conclusions I would like to make.

First – it’s important for beginners to learn ‘soon’ before ‘sooner’ and ‘soonest’. Some people may wonder why we don’t just skip to the end – the reason is because situations will not always be optimal and you might not always get the perfect ‘soonest’ technique in real life. By learning ‘soon’ first, you have a solid, simple technique to fall back on.

Furthermore, training in karate (and most other martial arts for that matter) is a progressive challenge. Instead of diving right into the deep end, it’s wise to slowly build up reaction time and confidence in technique. As time goes on, bunkai can be whittled down and technique refined until it achieves its core intended effectiveness.

Second – You might be thinking to yourself,  “The bunkai I learned from my Sensei is different than what you described above.” That is quite all right! Bunkai is an extremely vast sea of possibilities and what you learned can coexist with what I’ve shown here. What really matters is how we go about analyzing our kata and how we can make ourselves more effective.

All too often we wait for someone to come with magical instructions on how to be as good as the old masters, but the truth is we need to dig for ourselves just as much as we rely on our teachers.

All the best in your kata exploration!