One of the great things about bunkai (kata application) is how variable it can be.  A single series of movements can be transformed a hundred times depending on scenario, opponents, tactics, and strategy.  Unfortunately, despite all of this creative fruit for the picking, it is extremely easy to get stuck in a rut.

Base level bunkai is very useful and shouldn’t be over looked.  By base level I mean: a block is a block and a punch is a punch.  If kata tells you to block down three times in a row, that’s exactly what you do.  You block a left kick, a right kick, then a left kick.  After that you finish up with a punch, or whatever else kata tells you to do.

Deciphering base level bunkai for kata can take a very long time as many of the moves will seem cryptic and unwieldy.  There’s no reason to be concerned by that, and no reason to rush it (as I explained in a previous post).

But sooner or later, you’ll probably find yourself scratching your chin and saying ‘yea…but what else can I do!?’

This is the rut I speak of, and just like with writer’s block, it can be tough to pull yourself out without an external nudge.  I figured I might present a nudge here that tends to help me think outside the box when I need to.

Opponents: One or One Hundred

How many opponents are you fighting when you practice your kata? One?  Two? A handful? More than you can count?  This is a very important question as it will change the entire dynamic of how you perform your kata.

Imagine that you are facing just a single opponent.  While keeping alert for other dangers around you, you are free to orient yourself entirely on that opponent.  That means you can afford to be a little more stationary, and make small moves with your body to adjust for the maai (distance from your opponent).  You can then use your techniques to slip slight angles as your aggressor attacks and counterattack with ease.

(Yea the guy in the picture has a giant head. so what.)

With a single opponent, you can use those techniques to intercept and retaliate: 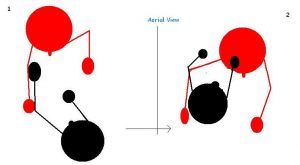 You’ll notice our brave combatant in the black intercepts the red attack and cuts the angle inward, reorienting himself/herself for a vital point strike to the temple, eyes, throat, or anything else he pleases.  This small shift in angle clears him from the oncoming second punch of his opponent.

With a single opponent, this “block, block” becomes an invasive disruption.  Since it’s just one attacker, the next step in your kata, whatever that may be, should be used to take this opponent out, or at least to the ground.

One opponent was nice, but now you’ve started trouble with two guys.  What did you do??

Well, whatever you did…they are looking for trouble.  Let’s look at the same technique with two individuals coming at you in quick succession (or even at the same time)… 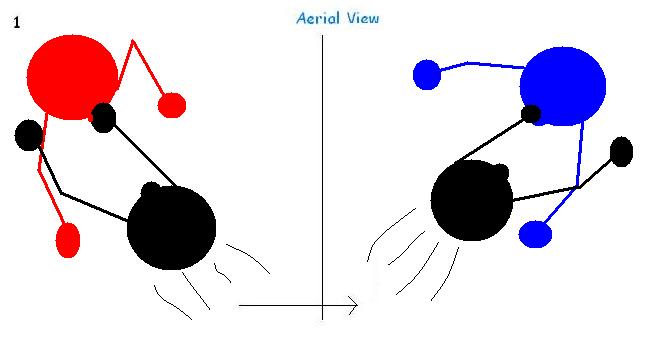 This time our hero in black has to move his body around a bit quicker.  The subtle angles he used with one opponent aren’t as applicable because he can’t afford to get tied up with in-close fighting while the other opponent rushes in toward him.  Instead, he uses a simultaneous block-strike motion as he shifts into each fighter.  Many times in kata we find ourselves blocking or striking.  Really, why have one hand in motion while the other remains stagnant?  Many movements in kata have inherent counterstrikes built in; we just have to allow ourselves to use them in quick time.

The last situation is that of multiple opponents.  The exact number of opponents isn’t really important, but it’s obvious that there are a whole bunch.  Let’s say they are pretty smart too, and manage to partially surround their target (our hero).  Using this same technique, it would look something like this…

Our fighter is using a very wise strategy – get out of Dodge. The first thing he does is analyze as quickly as possible the largest hole in the encirclement.  He recognizes that the right side, where the brown attacker is, is very cluttered.  Instead, he breaks for the red opponent.  Using the same kind of technique as before, he blocks and strikes to the face violently at the same moment.  This time, he uses his angling to shift to the outside of his opponent and pushes the red attacker into the blue attacker.  Bundling up the two closest individuals, he escapes as quickly as possible.

When doing bunkai, it’s important to think about your opponents, especially regarding how many there could be.  If you train in-tight against single opponents all the time, you might leave yourself tangled up with them too long for multiple opponent use.  However, if you are constantly floating around to different attackers, you might miss the more intricate uses of technique and how they can result in takedowns and groundfighting.

Be wary of leaving opponents too soon.  If you’ve successfully blocked an opponent, but haven’t dealt them a severe strike or takedown, it is probably unwise to move on to a new attacker.

Be careful not to get stuck in the habit of using 8,9,10 attackers in a kata.  You may be moving around and facing different directions, but that doesn’t necessarily mean every technique is intended for a new person.

I hope this was helpful.  It’s just a method I use to expand the parameters of bunkai, but it can be a great way to add realism to your kata.