Have you ever been brought to a standstill during your training by worry and doubt? Have you ever thought to yourself “ohh no, I’ve found a serious flaw in my system! I think I’d better just keep my mouth shut.” Or perhaps, “I just don’t think this stuff is going to work for me.” If you have, don’t worry – you’re not alone. If you haven’t, just keep thinking and investigating – my guess is that it’ll happen sooner or later.

When this kind of guilty concern happens in traditional styles, there are two kinds of coping mechanisms that I invite you to avoid. The first is acceptance. Some people will simply accept the fact that they aren’t very effective and will continue plugging away at what they do to maintain the status quo. The other is denial. Some practitioners develop an overcompensated, knee jerk reaction every time someone mentions the possibility of traditional training being imperfect.

The problem with both of these coping methods is that they do not result in deeper learning or understanding of the art. I’d like to explain how to bring concerns to your training and work through them to become a better practitioner.

The funny thing about martial arts training is that there is a strange dichotomy of appropriate behavior. On one hand, we are taught to trust and listen to our seniors, and perform as they do. On the other hand, we know through life experience that the best way to improve is to question, prode, and only accept that which makes sense. What’s a traditional artist to do?

The first step is to label exactly what is bothering you. Having an unsettled feeling in your gut during a kata or during sparring won’t result in anything productive; it will just produce stress and a feeling of dissatisfaction. You have to figure out what the problem is.

Instead of thinking “I’m not very good at sparring”, break it down:

Instead of thinking “my kata stinks”, think:

The farther you can break yourself down, the better the chances of identifying your issues. Furthermore, you can help your teacher help you by being able to describe your problems. Remember, only you really know what you are feeling – teachers can only do their best to identify what you need.

Some students feel foolish or rude asking questions. This is problematic because teachers have to worry about a whole class, and if you don’t express yourself, it is possible your worries will never be addressed. Of course, asking questions must be done in the proper way. It is important to follow the rules of etiquette that your dojo lays out, and to never be presumptuous. Remember – just because a part of a kata or self defense technique is not working for you, doesn’t mean it doesn’t work.

One characteristic that many good teachers share is a willingness and even enthusiasm in answering questions. The reason why is because they’ve put the same kind of thought and worry into their arts that you have. They are pleased to be able to help you get over a hurdle that they have encountered themselves.

Most students learn a version of the Age Uke – rising block. 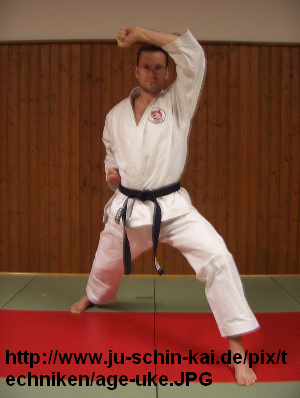 At first this move is all well and good because it protects your face. As most people are told, an attack is coming in either straight toward the head or in an arcing motion downward and the rising block clears away the zone.

As time goes on though, some students notice that they never find a good time to use the Age Uke during sparring. They can force it of course, but more subtle slipping techniques tend to be better designed to cope with the speed of combat. And, when they do try to use Age Uke, they find that their ribs and midsection are very vulnerable, and that their rising arm sometimes obstructs their view of the opponent. Even the oft-utilized block-high/punch combo seems better served with a brisk knife hand block in order to keep the elbow down and protecting the body.

Why is Age Uke so harped on when it has such limited value?

Students who come to impasses like this have to make a choice. They can accept the technique as flawed and move on; they can tolerate it as part of tradition and never use it; or they can begin an investigation of why it is there and what it can do.

Of course, my opinion is that the arduous investigation is the best option (I’m a bit of a downer sometimes).

One might begin by approaching the technique from a practical perspective. Instead of a rising block, what happens when it becomes an attack? The practitioner could evade an oncoming strike with a parry, and then use his rising forearm to strike up underneath the chin and push the opponent back at the throat and crush the adam’s apple. Or perhaps the forearm isn’t the focal point of the strike, but is instead a rising hammerfist strike to the nose.

One might also look at it from a historical perspective. The old teachers and practitioners of karate were known to have adapted the arts to best suit their body types. Consequently, many of the old masters were quite short (think Chotoku Kyan and Gichin Funakoshi). Perhaps to these men many punches were coming in too high to use techniques other than Age Uke. 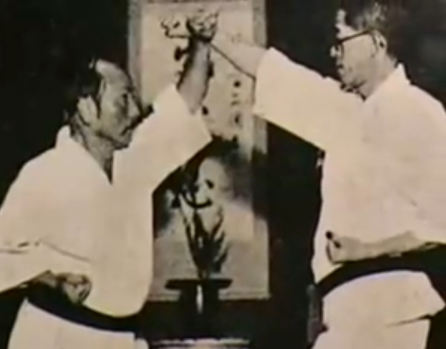 One might also mix in Kyusho when considering the efficacy of the technique. Even short individuals like Funakoshi Sensei left their midsections exposed during Age Uke. But what if that rising motion was the only way to expose certain vital points on the opponent’s body? It is feasible that the rising technique activated a certain meridian, which could then be compounded by striking points underneath the arm, into the floating ribs, or even into the upper ribs. Perhaps a simultaneous counterstrike while making the block made the inherent risk and exposure to oneself worthwhile.

These questions could lead to further questions, such as, where is it best to make contact on the opponent’s arm? How far do I need to rise until I can access valuable kyusho points? Does the block (or attack) have any pushing/pulling elements that I am not taking advantage of? If I make this move smaller and more condensed, can I use it to better effect during kumite? etc etc.

As you continue your study, you may come to realize that there are answers you never expected to find. You may also begin to adapt your martial arts to better suit your body type and abilities (why should a 6′ 5″ person do an Age Uke? Is the reason different than a 5’1″ person?). You may even be able to chip away at things that are not effective or valuable to you.

It’s important to remember as you go through this process to not drastically alter your style or how you teach it. The kata and methods have been preserved through generations because they are repositories of knowledge, scaffolding upon which many practitioners can climb. If you change things perminently because they work better for you, you may destroy the qualities of the technique that work for other kinds of people. It is up to you to explore while preserving the essence of what is being taught. Remember: just because you’ve become effective, doesn’t mean it’s time to start your own style.

I have found that the areas in which I have been most worried are the ones that have elicited the most intriguing avenues of study. It’s important not to hide from things that you are subpar at, or make excuses for those shortcomings. Accept and understand your deep concerns and use them to fuel you. Always respect and preserve what your teachers give you, but don’t feel like you can never think a different way, or move a different way.

Finally, don’t be too quick to toss aside things you don’t like or don’t understand. You may be discarding more than you think.