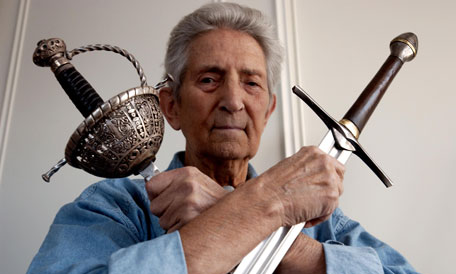 Bob Anderson, Master Fencer and Lightsaber Extraordinaire, Passes Away at 89

Very few martial artists have had more cultural impact than Bob Anderson…especially considering most people have never heard of him.

When you reflect on the best sword fighting scenes in cinema history, you might cite some of the following movies:

Imagine one man with the depth of knowledge and passion for excellence needed to bring combat to life on all of those movies. Bob Anderson was the man behind the swords.

“Born in Gosport, Hampshire, Anderson followed his father into the Royal Marines in his early 20s. In September 1942, he was one of the survivors when HMS Coventry was badly damaged in the eastern Mediterranean by German dive-bombers. After the second world war, Anderson, who had taken up fencing at a very young age, taught the sport as an instructor for the services. He won competitions with all four weapons – foil, sabre, épée and bayonet – and represented Britain at the Olympics in Helsinki in 1952. It was while waiting to compete there that he was asked to go to Pinewood Studios to work with Flynn on The Master of Ballantrae. ” – The Guardian

Bob Anderson was a man who managed to turn his expertise into a fruitful career. After working with Errol Flynn, Anderson’s star rose as he moved from movie to movie. He became known as a tough perfectionist working behind the scenes, but his effort repeatedly showed on film. Anderson even made appearances as he doubled for various actors.

Years of Olympic experience and stage presence made Anderson the elite sword coach in Hollywood all throughout his life.

Here’s more on Anderson as a coach and swordsman:

The Birth of the Lightsaber Duel

Although lightsabers played an important role in Star Wars Episode IV: A New Hope, they truly came alive in the duels of the second two movies in the original trilogy. The lightsaber appeared to be a unique mixture of fencing sword crossed with medieval broadsword. The results were stunning and game changing.

The individual under the mask of Darth Vader, David Prowse, was allegedly not up to the task of bringing the duels to life. It was Anderson who stepped in, at the age of 60, and fought Mark Hamill on screen.

The portrayal of sword work in movies has never been the same.

Despite his advanced age, Anderson continued to be active on movie sets, demanding excellence from actors such as Viggo Mortensen of Lord of the Rings. In fact, he was working on the upcoming movie The Hobbit, which is set to be released toward the end of 2012.

Sadly, he won’t be able to finish that particular project, but there is no doubt his mark will be left on the movie when it hits the silver screen.

The Lives of Many

The amount of lives Anderson has touched can hardly be overstated. The Princess Bride is my personal favorite movie. I recall growing up with it and every time I watched the sword duel between Wesley and Inigo I was stunned into silent study. The intrigue, banter, and athletics were perfectly executed. The moves were so fluid and astounding that I couldn’t imagine two better swordsmen in the whole world.

It’s satisfying to know that the man behind the choreography was indeed one of the best, and will always be remembered for his lasting efforts.