Kyoshi Bill Hayes recently clued me in on this interview he did and I would love to pass the savings on to you.

For those of you who might not know him, here is a bit of background info about Kyoshi Hayes.  First of all, he looks like this: 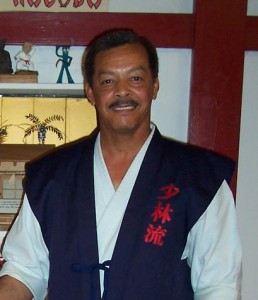 Secondly, he was a marine in the Vietnam war and was stationed on Okinawa at various points throughout his career.  Studying directly under Eizo Shimabukuro, Sensei Hayes became one of the most respected practitioners of Shobayashi Shorin Ryu.  Although my training time with him has been far too brief, his teaching and writing has really been an influence on my study of the martial way.

The interview I’m linking you to is between Sensei Hayes and Hanshi Jessie Bowen (whom I do not know personally).  It contains some really great conversation regarding kata training, visualization, martial science, wellness, and much more.

If you would like to streamline your listening a bit, cut into the interview at the 19 minute mark.  Everything before that is cursery background info and settling into the convo.