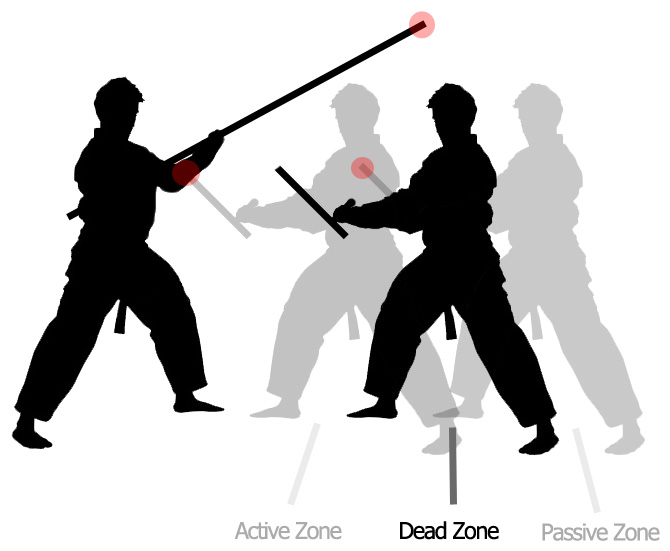 Sparring with short weapons for the first time can be a jarring experience, especially when facing longer implements like bo, shinai (bamboo sword), or spear. Kata and pre-arranged drills can teach good handling and combinations, but when the opponent is live and aggressive short weapons can feel a little lacking.

One of the first things students usually realize when they take up short weapons in a sparring environment is that the opponent rarely hangs around long enough for combinations to work as planned. They find themselves poked, prodded, and otherwise harassed while catching nothing but air with their own attacks. One of the most common end results when watching a match such as this is an agitated small weapon user, slowly losing ground until they decide to execute a full out bum rush into short distance range. They usually get in, but only after taking two or three solid shots on the way. Of course, if it weren’t for the padding and control of the opponent the small weapon user would have been severely injured before completing their attack run.

Having been on the receiving end of this kind of treatment and seeing it happen to others, I know one of the most common mistakes small arm practitioners make– living too long in the dead zone.

What is the Short Weapon Dead Zone?

Most martial artists are used to setting distance in empty hand sparring. Typical distance for sparring is just about close enough for the lead hand of both contenders to touch when extended. Hitting the body or head of the opponent would require an aggressive step inward, allowing the defender an opportunity to react (theoretically). 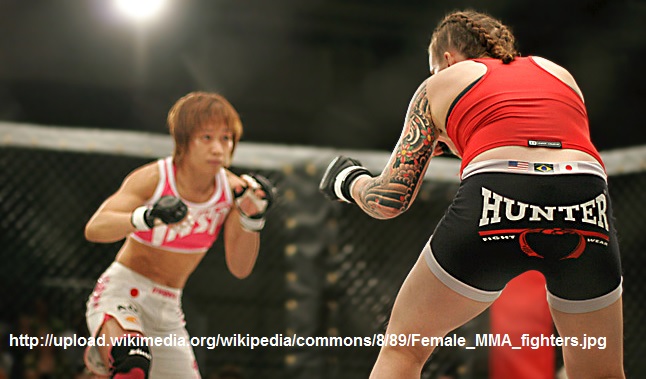 When using a short weapon such as tonfa it feels as if the distance should be set the same way. However, that empty hand sparring distance is almost exactly the ideal distance for a bo user to strike without needing excessive body movement. The end result is unfortunate for the tonfa user – getting hit swiftly and with little warning.

Take a quick look at the picture below. Observe the standard distance set between the bo user on the left and the tonfa user on the right.

If you look specifically at the black tonfa figure, you’ll notice he/she is in typical fighting distance for empty hand (roughly). However, you will also observe that the action end of the bo is already in range to strike. A clever bo user will keep their opponent in this range for as long as possible.

Look again at the image above. The shadowy gray tonfa figures show two zones where the tonfa user is no longer at prime risk. The farther out figure has an action end of the tonfa near the end of the bo. Although this will likely feel far away to the tonfa user, it is actually the ideal passive distance for him/her to set.

On the other hand, the close in shadow shows the ideal active distance. Although the tonfa user is still at risk, he/she is in prime location to do direct damage to the bo user. Once the dead zone of the bo is penetrated the short weapon user, with duel weapons and quicker manipulative speeds, is at a distinct advantage.

If the tonfa user is able to acquire either of these zones, the fight should be more manageable. Of course, that begs the question, how does one go from the passive outside distance zone to the close action zone? It inevitably requires moving through the dead zone.

Moving Through the Dead Zone

At first most small weapon users try the same tactic for penetrating the dead zone. They wait for an attack, try to block, and then rush into their opponent. Unfortunately, a bo or sword can be retracted at exceptional speeds and the small weapon user tends to eat multiple attacks on the way in. This is generally where an over-reliance on pre-arranged drills do a disservice to the student. A tonfa user may be in the habit of blocking, then swinging in retaliation, and finishing with a punch or swinging strike. Unfortunately, when attempting kumite (sparring), as soon as the block is made the bo user is retracting and striking again. The short weapon user tends to find themselves gaining no ground.

There are multiple tactics that can be used to avoid this core problem, but I’d like to share three in particular: simultaneity, sticking, and braving the gap.

Eventually most good empty hand fighters discover that if they block and counterattack at the exact same moment they tend to have better results. The same goes for weapons, especially if you happen to have two of your particular implement (sai, tonfa, tecchu, etc). There’s an added twist with small weapons work though. As the long weapon attacks, the defender needs to have an aggressive inward movement. The small weapons user needs to engage forward at the same time as the attacker, thus cutting the distance in a surprising fashion. This can be difficult because it requires moving deeply into an attack.

In Okinawa tode and kobudo we use the term “muchimi”, or stickiness. It is the essence of making contact with an opponent and maintaining that contact so as to better feel their intentions and manipulate their body and balance. Muchimi is more difficult to execute with weapons due to the unusual angles and hard deflections of the implements, however it is still very possible to achieve. Instead of hard blocking as a small weapons user, one can instead block-and-trap or parry-and-follow in order to keep contact with the aggressors implement. As a result, the small weapon user can “ride” the longer weapon as the opponent attempts to free it or retract it.

I often call tonfa and other short implements “weapons of bravery”. The movements required to make them effective demand complete resolve and commitment. A tentative attack or half-hearted leap will inevitably be deflected, dismissed, or suppressed. Braving the gap means waiting for a moment of over-confidence or laziness in the opponent’s defense and then completely cutting through the dead zone with a leap or short dash. This of course is one of the highest risk tactics but when effective can completely overwhelm the opponent.

It’s important not to confuse braving the gap with simply running in with abandon. Braving the gap requires pinpoint control of distance, waiting patiently in the passive distance range until the opponent reveals him/herself.

A Piece of the Puzzle

Distance control is only one piece of the combative puzzle. Timing, angling, psychology, and technique all play a factor. Not to mention, this article assumes combative engagements begin with a chance to establish distance (ignoring the reality of surprise attacks). Of course, that is one of the natural weaknesses of sparring, and the value in diversifying training. That being said, there is no feeling quite like having a bo or sword swung at you with unpredictable and focused intent.

As a weapons practitioner gets more experience the zones mentioned above tend to get tighter. The difference between the dead zone and passive zone can seem almost imperceptibly small, especially to the opponent. When this occurs, the opponent tends to swing, fully expecting to hit their target but missing just slightly. It requires a masterful understanding of the opponent’s length, technique availability, and mental intent to control distance in this manner. A worthy goal to strive for!