I’m very pleased to present this interview with Jared Andrukanis. Jared is a longstanding member of Anthony Bourdain’s team, having been involved in both No Reservations and Parts Unknown. In Season Six of Parts Unknown, Jared was on the ground with the crew in Okinawa to help capture some of the culture, food, and martial arts of the island. The episode is set to air October 11th at 9pm EST on CNN, and many of us in the world of Okinawan Karate are very excited to see it.

Jared was kind enough to answer some questions in regards to his experience on Okinawa and what it was like getting to know some of the most prominent karate experts on the island.

Q: Jared – What’s your role on the Parts Unknown team, and how long have you been with the series?

I’m one of the Producers for the show, and have been lucky enough to work with Zero Point Zero – the production company for No Reservations and Parts Unknown – for about eight years now. Great times, for sure.

Q: What are some of the locations you’ve had a chance to visit while working with Parts Unknown and No Reservations? Are there any that stand out as favorites or least favorites?

Well, I’ve been to every continent except Antarctica a few times. I’ve loved them all for different reasons, but if I had to pick a favorite – somewhere I’d go back on my own time – it would have to be somewhere in Asia. Specifically to Hanoi, Vietnam for a bowl of pho, but nearly everywhere I’ve been in that region has been pretty damn spectacular. Great food on the street, people are inviting, and are genuinely excited to show off their country to tourists.

Q: Could you talk a little bit about the prep work for going to Okinawa? Was there anything in particular that the crew wanted to see/visit/experience?

Every show we do is different, so we focus on letting the locals tell us where to go, who to see, how to get around, and what to eat. For Okinawa, it was challenging at first because it’s not a huge destination for Western tourism…so we started by reaching out to folks we knew in Asia, and getting some introductions to people in Naha and beyond. Once you’re in, you’re in – and then things start to fall in line and a show-like substance forms.

Q: What were some of your early impressions of the island as you first arrived? Was there anything in particular that struck you about the nature, food, or people right away?

My first impression was that this certainly wasn’t the Japan I knew from prior trips (I also worked on the Tokyo episode of Parts Unknown). Okinawa felt like a whole different place, which makes sense, because historically it was a separate kingdom from Japan. But still, that feeling of being somewhere new and under-explored was pretty damn exciting. 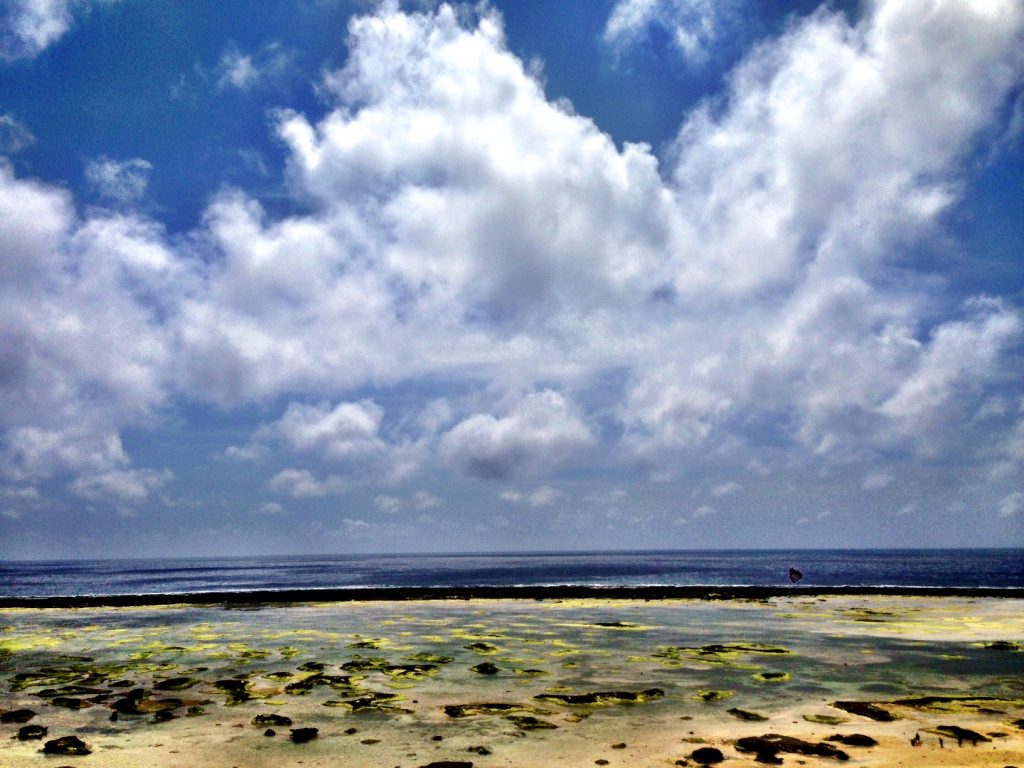 Kumejima beach scene in the morning.

Q: Walk us through a typical filming day for you. How did you organize and execute the different shoots? What are some of your filming habits to make sure you don’t miss any interesting, candid moments?

Those are trade secrets, unfortunately. What I can say is that the crew members get up way early, go to bed way late, and in between do our best to capture as much of the place as we can on a super-short timetable. The hardest part for me is knowing it’s impossible to capture it all. We try our best, though.

Q: Okinawa is a “blue zone”, meaning it is home to some of the longest-lived people in the world. Part of that is their idea of “Nuchi Gusui”, or “Food as Medicine”. What kind of habits did you see in their food preparation, and which dishes really stood out to you?

It’s funny you bring that up, because the longevity rates in Okinawa was something I had read about and debated exploring, but after seeing other versions of “food as medicine” in Southeast Asia (snake soup in Thailand and bird wine in Vietnam) the jury is still out for me on what kinds of food or drink grant long life or, um…other “powers”.

I think the real reason people live longer over there is that Okinawans don’t eat a lot of KFC. But I’m not a doctor.

Q: Were there any dishes in Okinama that you found particularly enjoyable or unpalatable? Okinawans are known to use goya and spam fairly regularly, which are unique ingredients. 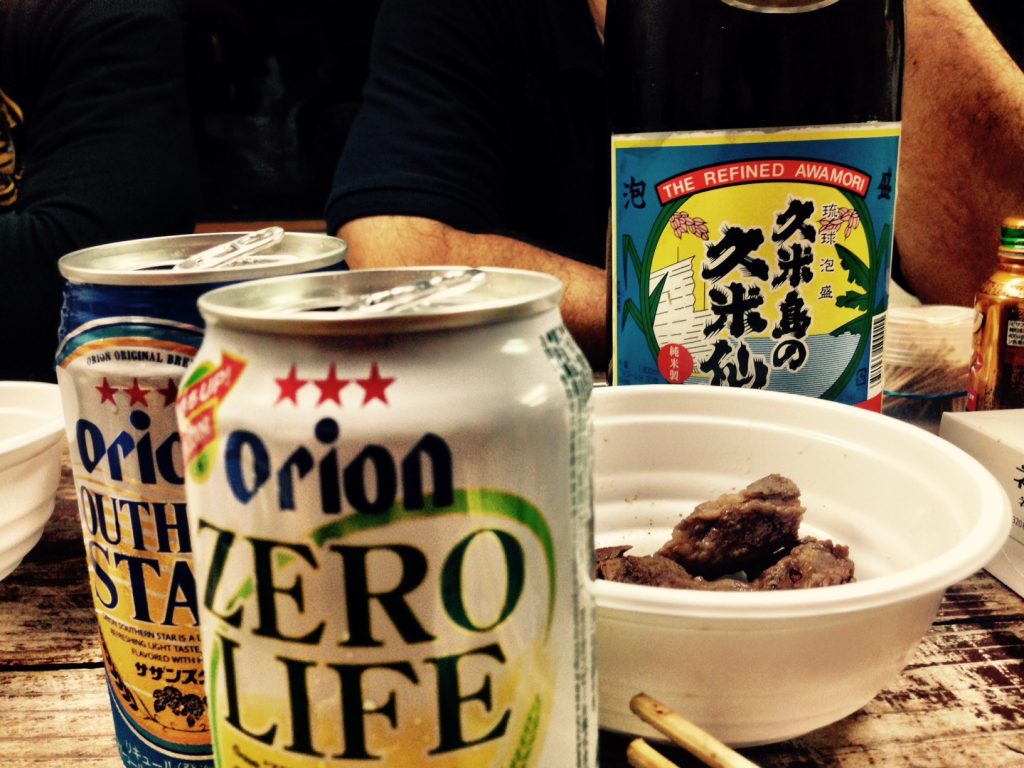 I loved all the food. Okinawan Soba and Taco Rice stand out as fast favorites, but everything I ate while in country was excellent.

Spam is awesome by the way…you just have to know how to bring out the best in it. Go to a Korean restaurant and order budae-jjigae (Army Base Stew) if you can. It’s Spam perfection. Spam-tastic, even. Go for it.

Q: You got to meet Hokama Tetsuhiro Sensei, a well-known Goju Ryu and Matayoshi Kobudo Sensei. What was that experience like, and did you get to feel any of the techniques yourself?

I am a diligent and dedicated non-practitioner of all forms of martial arts, and I’ve learned over the years that the worst thing to do is offer yourself up for any sort of demonstration where the person doing the demonstrating is known as a master in throws, strikes, holds, and kicks. You lose that battle every time. I’ll stick to filming it and leave the other stuff to the professionals.

That said, Hokama Sensei was a great guy, and a total badass. Watching his kata was one of the coolest things I’ve seen anywhere on the planet.

Q: Who were some of the other karate and kobudo practitioners you got to meet? What were some important ideas that they tried to get across while you guys were with them?

Sorry, I don’t want to pull back the curtain TOO far before the show actually airs. You’ll have to watch and see.

Q: Talk a little bit about the day you went to see Okinawan Tegumi.

My first thought was that this is old school, like I was watching one of the original martial arts. No established ring. No dojo. Matches just happen wherever you can find soft, flat, open spaces. It was like watching living history. Raw and real.

The guys we filmed with invited us back to their Tegumi club HQ for some beers and even more food after we finished shooting the scene. The night ended up with us taking turns playing rock/paper/scissors against the Tegumi masters where the loser had to do a shot of the local awamori. It was a blast. They were always competing. Awesome guys.

Q: Any memorable stories or moments during the Dojo Bar outing?

This is a kid-friendly site, right? Hmm. I’ll just say the viper sake was surprisingly tasty for a beverage that has a desiccated snake carcass in the bottle.

Q: For people visiting Okinawa, what places/foods/experiences would you most recommend?

Everything is changing in travel at all times, so it’s hard to recommend specific places. There’s always so much to see anywhere you go, but I follow a general rule when heading out. Here it is:

The minute you are ready to venture out from your hotel, find a local that speaks your native language, ask them to point you to the places THEY like to eat at. Go there, order up what everyone else in the place is having, and repeat as necessary. Oh, and smile a lot, too. That helps.

Stay up to date with Parts Unknown over at CNN.com!