Adapting and Adjusting (How to Carry On After Losing a Sensei)

This is the third article in Reader Week II. In this somber post, author Helen Cawley examines the state of her martial arts after losing not just one but two Sensei. These influential men led their style (Ryute) and passed away in close succession. Now Ms. Cawley faces the burden of honoring those instructors while trying to figure out how to carry on.

Adapting and Adjusting (How to Carry On After Losing a Sensei)

This past year, two of my teacher’s passed away, Taika Seiyu Oyata and Tasshi Jim Logue, and I have found it more difficult than just mourning the death of two people I loved dearly.  The first months were about getting used to the fact that I couldn’t just pick up the phone and say “Hi”, among other things.  Training was very difficult.  I kept thinking, what was the point? How could I really improve with out their guidance?  How would our organization stay together?  Would we continue to train as a group? Who would teach us? 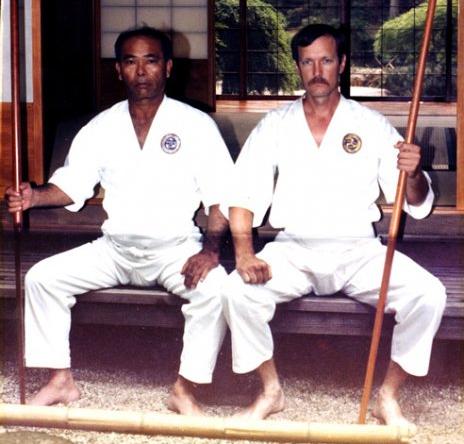 I always tell people that I started studying martial arts by accident.  I say “I wasn’t looking where I was going and tripped and fell into a class”.  I really didn’t know what it meant besides the Bruce Lee and Chuck Norris movies.  What really sold it to me was seeing how I, as a small woman, could have a fighting chance against a much larger man.  I wasn’t looking for a fight or MMA, or scoring points for trophies.  I enjoy the empowerment I feel by knowing I can stand my ground if I need to.  At some point I discovered that martial arts training becomes part of your daily life, like drinking a cup of water, and you never think about not doing it.

Then, I met Taika Oyata, and I was exposed to a level of martial arts that I had never dreamed of.  I saw a grace and sophistication that was beyond any silver screen, green screen or televised fight.  Small angles had dramatic effects.  A slight twist of a wrist with a bend in the knee could send a six foot, 200 pound man flying across the room.  And then I realized what the “art” in martial arts meant.  There was no divine channel being tapped to magically slam his opponents to the ground.  There was no magic wand behind a curtain.  Taika was a man.  He was a man who studied and thought and practiced and practiced again.  It was not one month or one year or 100 repetitions that set him apart from anyone I had seen before; it was 10,000 or maybe 100,000 repetitions and an unbelievable mind.  I am thankful that I was able to spend 20 years going to his seminars and learning fascinating details from him.  Many of the drills and concepts he gave us could not possibly be learned in a 4 hour seminar.  We usually got a study plan that he expected us to practice and show him how we improved when we saw him again in a few months. He often said that he can show us what to do, but we have to investigate each technique ourselves; we have to train our own body.  We were often chided for talking too much and training too little.

He wanted us to be professional in our study, professional in our technique, and he wanted us to know his culture and his family history.  This was important to him because he wanted us to know that he was passing down his art to us from his teachers and that what he learned from them was from their teachers, and their teachers before them.  It is hard to have these lessons in my memory only.  It is hard working with a group of people and only hear in my head that booming voice yelling “No, godamit” across the room at me.   I want to be able to have that voice telling me if I am getting it right or wrong and implicitly trust that the answer is true.

And now they are gone and I am not and I can’t stop thinking about punching, blocking, adjusting, and practicing.  So, where do I go from here?  My only analogy that I can hold on to is that I have been given a gift; his students were all given a gift.  We have been given ideas and drills and methods of study to follow.  If this gift had been an ancient porcelain vase of the finest quality, how would I treat it?  This I can answer:  I would cherish it, feel responsible for its preservation, and share its beauty with my friends who could appreciate it.  So now, how do I do that with memories and old lessons?  The cherish part I can do, but preservation and sharing are more difficult.  What if I remembered something incorrectly?  I don’t know if I will be able to preserve, accurately what I was taught.  What if I’m doing a drill and I forget a step or a block?  I might start an exercise on the wrong foot and it might come out as a cheap carbon copy instead of true technique.  Maybe I need to share with my friends and together our memories will be more accurate.  If five people all remember the same motion the same way, it has to be right, doesn’t it?  But what if we argue instead of share and we twist around the truth in a lesson we were given?  What if everyone remembers something slightly different, because we are different and the right way to do a technique is relative?  Who is going to tell us which one of us is more right, and if someone does, will we believe them?  I guess to move on I will have to take that risk.  This idea is a big adjustment for me, but I’m going to give it a try, anyway.  I do feel responsible to preserve what I know I know and to pass it on.  It is what Taika really wanted us to do.