A Quick Tip About Cat Stance

Most people have some sort of cat stance in their style.  In karate, it is often referred to as neko ashi dachi (or neko dachi, niko dachi).  It tends to look like this – 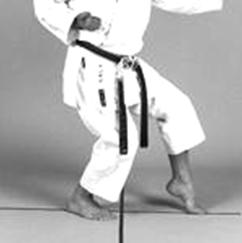 Now that’s a neko dachi you can set your watch to!  Back foot at a perfect 45 degree angle, front foot with the heel raised in a high pointed fashion.  Both knees unlocked.  Most of the body’s weight being supported by the back foot, allowing the front foot to kick quickly.

This is a great stance…but a little obvious, don’t you think?

One of the most important parts of traditional martial arts is hiding intent and technique.  An opponent who is given no clues as to your next action has little chance to defend against it. This is true in both sparring and street self-defense.

If you drop into a perfect neko dachi, what does this tell your opponent? 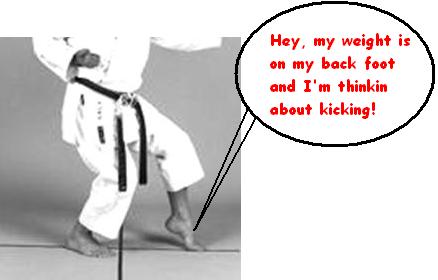 Why telegraph both aggression and intention like that? Instead, it’s much wiser to drop the heel back down to earth and make a more subtle shift of body weight onto the rear foot. 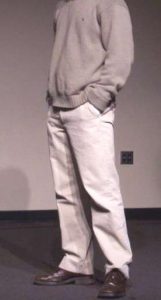 This guy is just hanging out…or is he?  Now granted hands-in-pocket is a bad idea, but our focus is more on the stance.  This gentleman is just as prepared to kick as his karate counterpart, but could easily fit into any public scene without sending signals.

Q: So why train in the photographic, heel pointed fashion?
A: Good habit development!

If white belts were trained to be casual right off the bat, they might not grasp the proper weight distribution and heel alignment.  The instinct to balance themselves evenly or improperly would be very strong.  By keeping the heel up and the knees flexed, instructors can analyze from across the room how good a stance is.

Unfortunately, it’s easy to get stuck in that mindset and never play around with adapting neko dachi into your day-to-day life.

Here’s something fun – in normal conversations with people throughout your day, try setting prime kicking distance, and settling into the natural neko dachi that I’ve shown above.  Hypothetically, if the person you’re talking to suddenly made a move (secret ninja attack!), you should be able to stick them right in the floating ribs or knees with a solid front kick. If you’re getting weird looks from the people you’re talking to, you know you aren’t casual enough yet.  Keep tweaking it.

final thought – what we’ve got here is karate training everyday, outside the dojo, that improves technique, distancing, timing, and mindset.  What a beautiful thing!