Welcome to the land of nothing-is-sacred (aka Hollywood).

Word got out that there is a new Karate Kid movie in the works.  This film is projected to be a continuation of the Karate Kid storyline that will “borrow elements” from the originals (as opposed to being a strict remake).  Slated for the lead role is Jaden Smith, 10 year old son of Will Smith.

Some other tidbits about the production-

“‘The Karate Kid’ will be produced by Jerry Weintraub (who launched the original franchise) and Overbrook Entertainment’s James Lassiter, Will Smith and Ken Stovitz. It will be the second movie on which Will Smith and his 10-year-old son Jaden work together.

The shooting will start next year and the remake will be written by Chris Murphy. The movie will reportedly continue the plot of the 1984 hit and will go with the action in more exotic locations such as Beijing and other cities. China Film Group Corp. will co-produce in China.

Just like in any other karate movie, Jaden will play the role of a bullied kid who is eventually trained by a mentor in various and unexpected ways (remember the waxing method?) to finally beat the bullies.” – EfluxMedia

“The part of Pat Morita’s inimitable Mr. Miyagi has yet to be cast, but given Jaden’s apparent inability to appear onscreen without pops by his side, don’t be surprised when Big Willie’s Dojo takes on Cobra Kai in this updated version.” – Variety

I’m a fair guy, so let’s start off with something I like about all this.  Will Smith is a pretty fantastic actor.  I’ve enjoyed Independence Day, the Omega Man remake (I Am Legend), and of course Fresh Prince of Bel-Air.

Now, this is a story all about how
My life got flipped-turned upside down…

Will Smith is great.  And honestly, there is nothing wrong with his son either.  He is a talented child actor.  The problem is in the principle.

The Karate Kid Movies (1 and 2 especially) were a rare occurrence.  They were films that brought together entertainment, culture, and martial arts in a way that had never been done before.  I can’t think of any other movie that tries harder to express real martial spirit (not just ass kicking).

Furthermore, the original movies were steeped in Goju-Ryu, a legitimate karate style. The training done by Daniel (paint the fence, sand the floor) were all taken within the context of Goju-Ryu kata.  Amongst those kata, Tensho was utilized most predominantly. (Tensho shown below)

It’s extremely rare for a movie writer who cares about moral message and historical relevance to get together with producers and film makers who care about the same thing.

That’s why, when it happens, you appreciate it and leave it alone.

Or…if you’re a Hollywood exec…you try to squeeze a couple more pennies out of it. like so: 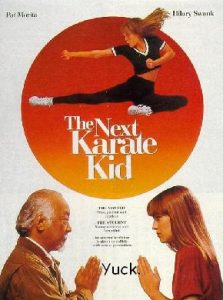 The Next Karate Kid was a corny, canned remake of the original plotline, which was an especially bad idea because Karate Kid III was already a pretty corny, canned remake of the original plotline.  The additional problem with Next Karate Kid is that they threw out all of the things that made Karate Kid plausible.  Instead of focusing on Okinawa, now the focus was on mysterious Buddhist monasteries (real original) and proving that Hilary Swank, with a weeks worth of training, could beat up 6 or 7 dudes without breaking a sweat. Blech.

Unfortunately, it seems like Hollywood didn’t learn from its failed resurrection attempts and will have another go at it.

Jaden will be 11-12 yrs old when the filming of this movie starts…what karate are we really going to see here?  When I teach kids, I focus on very simple self defense techniques like foot stomping, shin kicking, and calling for help.  What do you think Jaden is going to do? (Answer: spinning hook kicks while surrounded by 5 bullies).

Replacing a coming of age story will be super adventures to “exotic locations” and pouty “stop picking on me!” scenes.

Will Smith will be funny, entertaining, and maybe even a little moving…but it still won’t excuse the fact that they chose to throw the original Karate Kid movies under the bus in order to get a little extra publicity and buzz.