A Subtle Technique to Maintain Readiness

I recently moved into a new apartment, and with that has come a host of new sights, sounds, and experiences.

If you live in one house long enough, you become accustomed to that place’s personality. Creeks, cracks, and groans become almost imperceptible parts of your daily life. However, when you move somewhere new, each sound is noteworthy to your consciousness. In a familiar home noises that are commonplace are easily distinguished from those that are abnormal. At a new place the differentiation is less defined.

Almost every individual has, at one time or another, heard an unusual noise that has set them on edge. Something sudden and concerning. During those stressful times there is initial surprise or dismay as the noise develops, followed by stillness, quiet, and listening, ultimately concluded by a decision (investigate/escape/act) or lack of decision (freeze/ignore).

I’d like to explore one method you can use to optimize your readiness to make a decision and perform to the best of your ability when that moment arrives.

In my new laundry room there is a large access panel into the ceiling. When we first arrived the hatch was open so we knew it led up to the “attic” of the building. We also noticed that in order to maintain heat and security the hatch was quite thick (about 2-3 inches of hollow metal) and heavy. 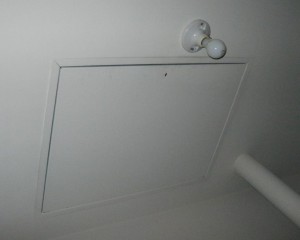 Why it was open we didn’t know nor did we think much of it. We simply raised it back up until it latched shut. A few days later I was working alone in my office when I heard a deep thud from the laundry room and the rattling of springs. I felt the vibration of the action through the walls and knew immediately that something unusual had happened.

I thought about the hatch. I was worried about it’s connection to the rest of the building, it’s comfortable human size, and the fact that it had been opened before. I grabbed the nearest implement handy that I was proficient with (a metal pen) and peaked outside the office. Unfortunately, the laundry room door was shut.

I waited, completely quiet, to detect any follow-up rustling (continued activity would be a strong indication of something alive in the room).

It was at this pivotal time that I used a technique that you can use as well in tense moments.

When suddenly stressed the body’s Amygdala begins to enter survival mode, and in doing so desires to lock the body into inaction. It’s primitive responses of fear, stillness, and hiding have preserved human life for thousands of years and has stuck with us ever since.

To counteract these effects, I do something very simple – I shift my weight to the balls of my feet. I also adopt a very slight raising and lowering of the body weight. Essentially a bounce, but slow and deliberate and almost imperceptible.

Shifting the weight to the balls of the feet sends a subconscious signal to the body that you are about to take action. The body relinquishes some of it’s physical lockdown. Not only that, but the emotional state begins to change from one of fear and “what-if” to one of readiness and action, be it fight or flight. The slight bouncing promotes a continuation of blood flow and energy flow. 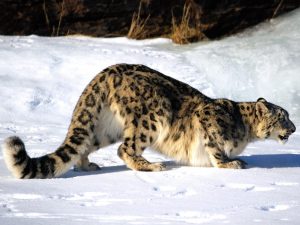 As martial artists, we conduct a large amount of our training on the balls of our feet. As we move, slide, spar, and defend ourselves we often need that mobility. The physical connection of that ball-of-foot stance puts us back in touch with our training and helps reconnect to that mindset. Training is of no value if we are too busy getting lost in our own heads and allowing the primitive parts of our brain to lock us into inaction. “The lizard brain” can be both helpful and harmful, so we must also develop small habits which can best circumvent those reactions which are least valuable.

I spent a moment worrying about all the ways a person could slide into the apartment with weapons, tools, and bad intentions. My muscles were tense. As soon as I shifted to the balls of my feet and utilized the slight bouncing I immediately returned to my training. I felt ready and collected and even thankful that I was the only resident in the apartment. I was also fortunate enough to have my metal pen right nearby. I knew where the intruder would be and he wouldn’t know where I was, which means he’d have to be faster than me inside of a 1-2 step radius. Even if he had a gun I like my odds at that range with the element of surprise.

I continued to wait and listen patiently until I was convinced that either no one was in the room…or that they had settled in and were folding laundry. I carefully investigated further and found nothing of consequence accept a faulty hatch door which had fallen open once again.

I’m sure I didn’t respond perfectly, but that’s ok. I was able to overcome my body’s natural reflexes that hinder decision making and quick movement during times of need. Yes, lots of training was a big part of it. But the body has very subtle psychology and energy that can be manipulated.

Keep this technique in mind the next time you find yourself in a tense situation, be it home invasion or otherwise. It might just help during the inevitable creeping of an amygdala hijack.